How to Help Your Garden Robins to Nest

Known as the loyal gardener’s friend, the red breasted robin is a familiar sight in our back gardens. As you potter around your veg patch and borders doing various jobs, you’ll often notice a robin over your shoulder, watching and following you as you turn over the soil to uncover a worm or ground beetle. In fact, they’re one of our favourite garden birds because of their association with Christmas and their beautiful year-round song.

When do robins begin to nest?

You may notice your garden robin looking for potential nesting sights as early as January, but the breeding season typically starts around the end of February and beginning of March. It depends on the weather and how cold it is. Robins usually lay between four and six eggs in one clutch which the female will incubate for about 13 days. After hatching, both the male and the female will care for the chicks who will fledge around 14 days later. The mating pair won’t remain monogamous and in fact the female robin will begin to build another nest for a second brood, and occasionally even a third and fourth that spring, each with different partners.

Robins actually like to nest relatively close to the ground and are known for building their nests in old disused items left around the garden – like a discarded hanging basket, an old welly boot, even a teapot. Especially if your garden is a little wild and has grown around the potential nest, providing shelter through vegetation, climbing plants and ivy. 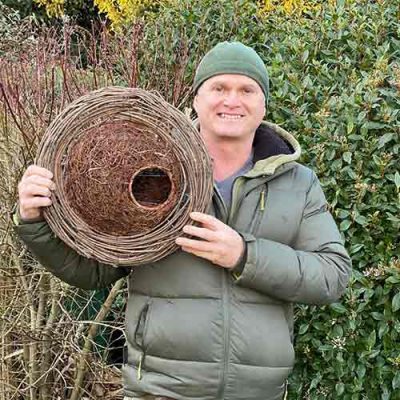 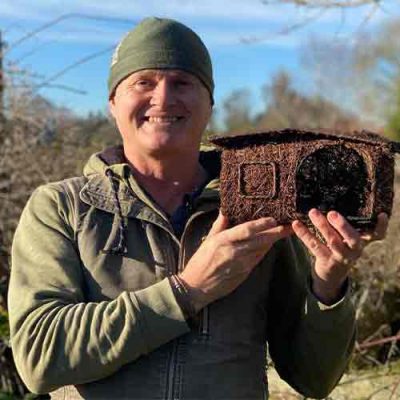 Robins, as well as wrens, are a little different when it comes to choosing a nesting site. That’s because they prefer what’s known as an open fronted nester. Whereas other familiar garden birds, like tits, prefer the more well-known hole nest boxes, with a small access hole on the front, robins like to be able to see out.
What’s ideal is a nest site which enables them to conceal themselves inside away from the view of predators, but still provides an open front to gain access and assess any dangers before leaving to gather food for the female or the chicks.

The Simon King Cabin Nester and the Simon King Wreath Nester are based on a similar design which has proved very effective for robins and wrens. As Simon says, “Inside is a chamber, which is nice and secret, into which robins and wrens can tuck their nest out of the site of predators like magpies and gives a landing platform for the male to feed the female or adult birds coming in to feed chicks.”

The Cabin Nester is finished with a cute house design which looks adorable in the garden. Whereas the Wreath Nester is unique in the fact that it can become a craft project for any wildlife-friendly gardener. It gives the option of decorating the wreath with any seasonal natural material such as ivy, pine cones and honeysuckle.

How can I prepare my robin nester for best results?

The first to say is, don’t put any nesting material inside. Simon says, “the birds themselves do that and will positively benefit from a clean, open home to start with. Then look around garden and think like a robin if you can. Look for a secluded quiet spot that’s not terribly high. Somewhere secretive and peaceful and ideally away from any feeding station. Robins don’t want to have to defend their nesting territory from other birds just coming and going to get food.”

Where should you site a robin nester?

The Wreath Nester comes with a hanging rope along with a section of looping wire which can be used through the back of the nester to secure it even more tightly to a fence post or into ivy. The Cabin Nester also features this wire secure.

Simon says, “Or you could even pop it straight down on the floor which you might think is a curious place to put a nesting opportunity but robins very often like to nest very low so long as they feel hidden so if you dress it with lots of ivy and other vegetation into the wreath, it’s absolutely perfect.”

Just as they like to nest lower down, robins also like to feed from the ground. You will rarely see them on hanging bird feeders, instead they prefer to take any mealworms, seeds, sunflower hearts or raisins you leave for them from a ground feeder or just scattered on the floor.

Can you use your nester as a roosting site during the winter?

Absolutely. Both the Wreath Nester and the Cabin Nester are ideal roosting pockets for any wild garden birds during the wet and cold winter weather. If a robin has nested in yours during the spring, then it’s a nice idea to clear some of the nesting material away, thinning it out and leaving some on the floor. Then any roosting bird can use what they fancy.

“It’s the opportunity for birds like robins, wrens perhaps even pied wagtail and spotted flycatchers to nest but it’s also a great roosting opportunity during the cold nights in early spring. Birds need to find somewhere cosy to tuck themselves away to spend the night and our robin nesters are the perfect spot for just that.”

The Ultimate Feeder for Birdwatching