Many years ago, I developed the revolutionary nester design which, with our sister company Wildlife World, has evolved into the enormously successful Brushwood Nester and its companion nesters, the Cabin Nester and the Wreath Nester. Its simple but unique design principle of a hidden recess with a protected landing platform, appeals to the European robin but also to wrens, wagtails, spotted flycatchers and other species to raise their families. It also offers a protected and secluded roosting opportunity for many species at any time of year.

From time to time, I see concerned posts from folk wondering if the nesters somehow render their occupants more susceptible to predation, specifically from cats, rats and magpies and I would like to address these concerns.

Don’t forget just how clever our garden birds are

Right off the bat, let me say that most mature birds are really quite wise when it comes to choosing a nest site. If they were not, then they would fail to raise broods more often than they already do. In short, a nesting robin tends to choose wisely. No one and nothing can convince a robin to nest somewhere substandard.

Predators too are canny, and they would equally fail more often if they were unable to sometimes outwit their prey and secure sufficient food to raise their own families. The balance of predator/prey relationships is ancient and delicate, and one which we humans have frequently disrupted with our wholesale destruction of natural habitats and ecosystems. 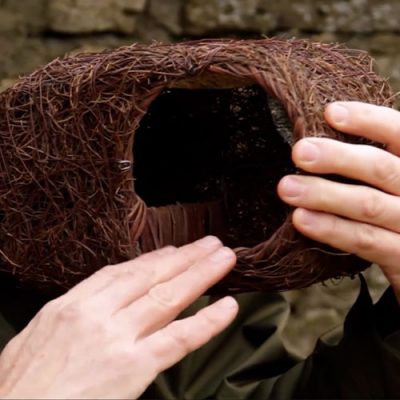 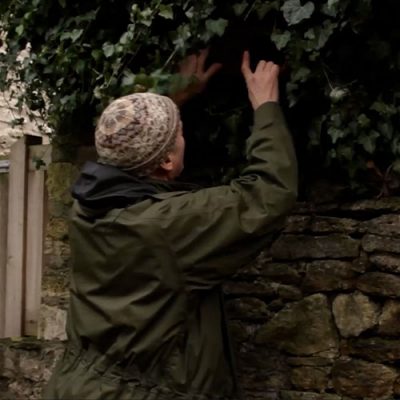 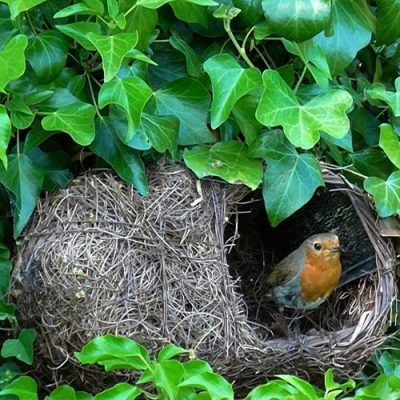 Robins naturally choose to nest in low level sites, from ground level up to about two metres high. There are examples of robins nesting higher up but they are infrequent. As a result, they depend on their secretive behaviour and nest locations to avoid the gaze of predators.

Robins will seek crevices in the base of hedgerows, nooks and crannies in old walls, particularly where vegetation such as ivy grows, and low crevices in trees. Less naturally, they will also frequently tuck their nests away in garden sheds where they have access to the outside world, and I have found nests in old pots and pans, in the centre of coils of electric cable and even the pocket of an old jacket hanging behind a shed door. All of these natural (and less natural) nest locations have the potential to be accessed by predators.

How is the Brushwood designed to protect robins?

The Brushwood, Cabin and Wreath Nesters not only offer the ideal environment for robins and other species to raise a brood but, by comparison to most of the natural sites they may choose to nest in, they also offer a degree of protection from some of the predators which may target them. This protection comes from the hidden nature of the nest itself which is tucked around a corner, beneath the weather proof canopy. Very few natural nest sites offer anything like the same degree of cover. Whilst the canopy cannot prevent a predator, which has spotted the nesting birds’ activity, from raiding a nest, it does significantly reduce the likelihood that the nesting birds are spotted in the first place – much more so than many ‘natural’ nest sites.

How to position your Brushwood Nester

The positioning of the nester is key to its success. If sited too high up, it may, if you are very fortunate, attract a spotted flycatcher or perhaps a house sparrow but will be very unlikely to attract a robin or a wren. Both of the latter species actively choose to nest relatively close to the ground. I have had greatest success with nesters positioned anywhere from one to two metres off the ground, with some vegetation surrounding or even shrouding the nester. This has included a tree with ivy, an ivy clad wall, a privet hedge, a post (also with ivy on it) and inside open fronted sheds and log stores.

Of the many nests which I have monitored in any of the brushwood, cabin or wreath nesters, only one was predated and that was inside a shed! To this day I am uncertain which predator found the nest, but my hunch is that it was a weasel. Having raised an orphan weasel I can assure you that they can go anywhere a robin can (or for that matter a blue tit, great tit or other cavity nester) and so it really is down to fortune whether or not these mighty little mustelids stumble across a nest at any time in any location.

In short, all of the nester series of designs offer at least as much, if not significantly more protection from predators, as the vast majority of natural nest sites. Sadly, natural nest sites are increasingly rare, especially in the garden setting, so by introducing well sited nesters to your garden you are undoubtedly giving your local robins, wrens and other bird species a far greater chance of successfully raising a family than they otherwise would.

How to Help Your Garden Robins to Nest

How To Attract Bats To Your Garden